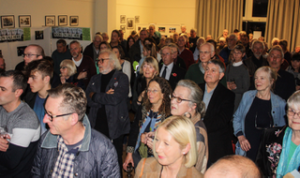 Standing room only in Hall

The launch of Christine Brennan’s book, “Metfield, Tales from a Suffolk Village” was a great success and at the party on Saturday a great time was had by all!

The support for, and interest shown, in Christine’s new book was overwhelming. Over 200 lovely people turned up. Indeed, according to organiser Linda Norris “Just before the doors opened it was reminiscent of a jumble sale, queues stamping their feet in the cold and demanding to be let in! It was truly ‘standing room only’. Some guests had even travelled from as far as Cheltenham.”

Linda reports over 200 copies of the book were sold which is a great start and Christine is delighted that so many people will be reading her tales and anecdotes and looking through the amazing photographs. What a tribute to her achievement!

Copies of the book will be on sale later this week in Metfield Stores (price £10.00), Robinson’s Stationers of Harleston and, in due course, Halesworth Bookshop. It would make a great Christmas present.