This year the annual Metfield Summer Fete on Saturday August 19th will feature a Mini Beer Festival hosted by the Village Hall Bar.  This will take place alongside the 40th Annual Metfield Produce Show which occupies in the Main Hall from 1:30pm. 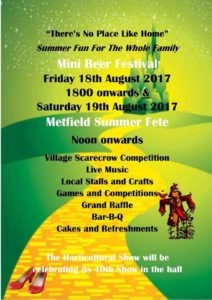 The Mini Beer Festival will kick-off  at 6pm on Friday 18th August and then continue from Noon on 19th August during the Village Fete.

The Fete will include Live Music as well as a Scarecrow Competition in addition to a range of games and competitions, Bar-B-Q and various stalls and crafts.  There will also be a grand raffle.

Previous:
« Book launch set for November
Next:
Path and Turf »